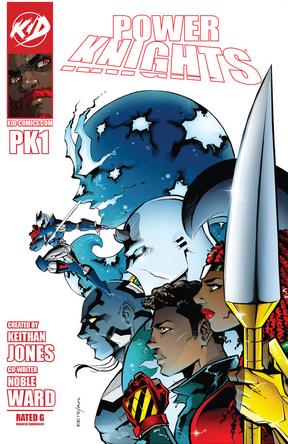 Created and Written by Keithan Jones
Co-Writer: Noble Ward
Color Flats: Salif Thompson
Editor: Mike Tener
Surviving a death sentence for crimes they committed against their will, Dragon Blaze, Princess Ozana Raxi, Metalstar, Bluzara, Camouflage and Warseed find themselves on planet Earth free to decide their own fate. A pact between them is made to not interfere with mankind's world and live reclusively among them. However, Warseed, fearing becoming a slave again, decides to take Earth as his own to safeguard his future. Will the other "Power Knights" join him or become liberators of mankind against him? Read Power Knights: Blades of Liberty to find out how it all unfolds.

WELCOME TO KID! A NEW era IN COMIC BOOK ENTERTAINMENT...

a preview of PK1: Blades of Liberty